holidays at the blog! have  a wonderful holiday

Each man’s life touches so many other lives.

When he isn’t around he leaves an awful hole, doesn’t he.

Clarence ,the angel, as he shows George Bailey what the world would look like if he had not lived. 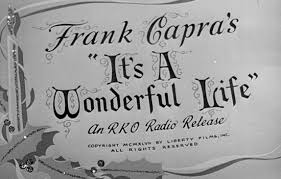 This marvellous and whimsical 1946 film by Frank Capra is my favourite Christmas film by a long way .

Set against a backdrop of (now nastalgiac) small town America and rival models of capitalism,  it is very relevant to the contemporary  economic crisis. It depicts the tension between a kind and caring money and a greedy, destructive money – between a gentle, co-operative and caring capitalism and a hard, competitive, egoistic and ruthless capitalism. In our time of huge and ugly  global inequalities, the ruthless capitalism  seems to have won hands down! But hopefully not for much longer.

The film ‘s central ideas though are also whimsical and are played out through the presence of an angel, Clarence who desperately wants to get his wings. The film can be seen to pose the puzzle: what would the world look like if you had not lived?  It suggests the importance of the insignificant , of the everyday , of our daily routine acts of kindness.  For me it is a film centrally about the contingencies of life and the centrality of kindness in human relations. It highlights the value of the individual in a stream of caring relationships, where people look after each other.

In the film, our ‘hero’, George Bailey , finds that he has spent his entire life giving of himself to the people of Bedford Falls. He always wanted to get out the small town, travel, seek new fortunes. But his opportunities are always being thwarted whilst he gives himself  to others. The background to the story is a conflict between ruthless market capitalism and local ‘friendly society’ capitalism – symbolised  by  Mr Potter, greedy and power seeking,and George Bailey who runs the local modest building and loan company to help the town’s folk get home of their own.

The first half of the film sets the scene. Then tragedy strikes. On Christmas Eve, George’s Uncle Billy loses the business’s $8,000 while intending to deposit it in the bank. Potter finds the misplaced money and hides it from Billy. When the bank examiner discovers the shortage later that night, George realizes that he will be held responsible and sent to jail and the company will collapse, finally allowing Potter to take over the town. Thinking of his wife, their young children, and others he loves, he decides that they  will be better off with him dead. He contemplates suicide.

His acts of kindness in the past have saved lives and reputations, and small acts have had big consequences. On the other hand one fatal chance error – money on the way to bank is lost and by chance ends in the hands of Potter- brings chaos and imminent suicide.

But he is saved only  his guardian angel who comes to him in the nick of time:  the prayers of his loved ones result in a gentle angel named Clarence coming to earth to help George…..George can  have a wish and George wishes he had never been born. Clarence then shows him what the world around him would have been like if he had not been born and if:

He had not saved his brother Harry  from drowning in an ice lake in his childhood? Harry went on to save many lives in the war.

He had not prevented the delivery of a dangerous poison from a local druggist whose wife had just dies: he  would have accidentally poisoned a customer……

He had not married his wife, Mary, who would then have lived alone with no children?

Without his leadership, the town would have been take over  by Potter, and beocme a very sleazy Potterville, sunk in a heatless capitalist mire…..

What would the world have been like?  This is the world of ‘what if”, of contingency, choice and chance. But it is also the  world of the individual and deep human inter-connectedness: of the ways we all make differences to each others lives. The is the vast  web of individual interconnected humanity.

It seems to me to be one of the great humanist films. 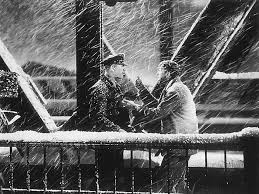 At moments , this is a very dark film. It ends famously with a suicide attempt.