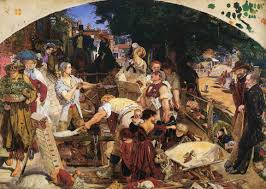 This astute and telling painting is featured in my text book on page 494-5.

It can be found displayed routinely in Manchester City Galleries but right now and for three months, it is being displayed at the Tate, Britain in London as part of their Pre-Raphaelite Exhibition (12th September 2012 to January 13th 2013)

If you look closely at it, you will find at least 10 kinds of work – but none is clearer or more prominent than  that of the labourers right at the front. It seems that Brown  values this most – and indeed there is an implicit criticism of the leisure found in the wealthier classes.

The painting is considered  a masterpiece and a prime example of Pre-Raphaelite art. Brown himself declared in 1864 that the finished canvas – which took him over ten years to complete-  embodied ‘the work of my life’.

Read the Wikipedia entry on the painting. Work