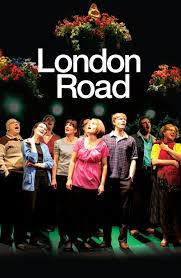 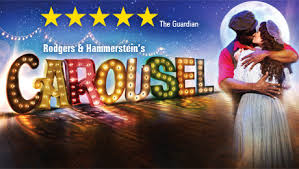 One can make the claim to be the greatest musical of all time – Carousel– and it was first produced in 1945. The other – London Road –  had its opening at the National Theatre only last year. Both can be said to be ‘dark musicals’,  giving lie to the idea that  all musicals are light, fluffy and cheery.

One is a fictional ‘book musical’  (based on Ferenc Molnar’s Liliom)  and deals with a working class, wife beating thief who cheats and finally kills himself . The other is a documentary musical dealing with a real life serial killer- Steve Wright, a fork lift driver –  who moves into 79 London Road, Ipswich and starts on a killing spree where five prostitutes are murdered .

Carousel is very well known; and it was a beautiful if standard production staged by Opera North at the Barbican. On the day I saw it Billy Bigelow was played by Eric Greene: and the fact that he was black gave it an undeveloped but thought provoking new theme: not just class but race. This was not in the original and would have made it a different musical: a white woman and a black man in 1920’s Maine is surely  a whole different tale? But here I think it was used simply as  colour blind casting..

London Road was something else. Most people look quite shocked when they hear that a musical has been made out of a chilling, recent serial murder of prostitutes (The murders took place in safe and provincial Ipswich in 2006 and led to a sensational national press panic). The style is indeed unusual. The author Alecky  Blythe engages in a method  which entails using the journalistic technique of interviewing her subjects, recording them, and then providing an edited verbatim script for actors to speak from. But in this performance , she has had the speech set to a minimalist musical background by Adam Cirk.  The songs follow the speech patterns and rhythms of the interviewees as they face the crisis of a serial killer in their street and the invasion of the press. And some of the key songs reflect  key themes, often taking on a Greek chorus quality– ‘ Everyone is very very nervous’, ‘It could be him’, ‘They like a good moan’. 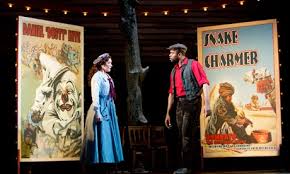 What the musicals have in common is not just their dark themes; but their sense of hope. They both show people under great stress but not somehow giving up. Of course the song ‘You’ll Never Walk Alone’ is the great ending of Carousel; but London Road also celebrates the local community, its hanging baskets, its coming together in a time of crisis. I was left thinking that one of the reasons I like musicals so much is that in the end – whatever tragic tale they tell (and they often do: think Les Miserables or even Phantom), they usually leave us with a sense of hope.

And in this dark world, a little hope from time to time is very important.