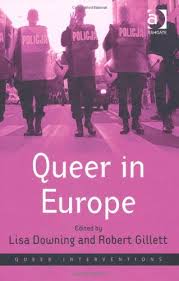 The challenge to understand the complexities of sexual differences across Europe is a significant one.  There have been a number of international symposia over the years to attempt to throw light on these critical issues. In the late 1980’s and early 1990’s, for example, there were several European conferences organized through Erasmus for Lesbian and Gay Students at Amsterdam, Essex and Utrecht – when Queer theory was just beginning to appear.  Now, twenty years on, we have the two volumes under review here which critically document some of the significant progress (and failures) since that time. Both are collections with editors mainly based in the U.K.  One highlights the old Europe; the other gives much more focus to the New Europe – Eastern and Central. Of course the very notion of Europe is a problem; but between them, the books do cover seventeen complex countries- ten in Western Europe (Belgium, Cyprus, England, France, Germany, Italy, Ireland, the Netherlands, the Nordic Region, and Spain), and seven in Central and Eastern Europe (Russia; Romania, Slovenia, Serbia. Macedonia, Bulgaria). Poland features in both. The two collections are both published by Ashgate – one as a stand alone volume, and the other (Queer in Europe) as part of the Queer Interventions series .

Just what ‘Europe’ (and indeed, ‘Queer’) means remains a bit of a puzzle and some of the introductory articles discuss this. On the one had Europe can be seen positively as a major case study for the resistance of US unilateralism. Negatively, though, Fortress Europe may also be seen as the problematic imperialist transmitter of Enlightenment civilization to the rest of the world – something anathema to Foucault, Butler and queer theorists. But in any event this too is a problem as Europe itself soon fractures into a thousand ethnicities and conflicts of its own, as well as a major schism between the rich West and the poorer East (once the richer North and poorer South). More than this, we also have the conjunction of two dispersing tendencies – a fracturing, schismatic ‘Europe’ and a deconstructing, dissolving gay and lesbian sexuality as a residue of the old identity politics – into something like European Queer. Tensions abound: the world is never a safe and clear place.

Three themes stand out to me from both books.  First is the banal point that all European cultures (like all cultures in the world?) experience versions of homophobia, heterosexism, heteronormativity and their linked patterns of discrimination- although some more so than others. There are some surprises here. For example, the Netherlands is well known for having a long history of Europe’s best track record on gay rights – but  Gert Hekma’s account shows just how checkered this has been in recent times.  It has a ‘marginal place at the table in a resolutely heteronormative Netherlands’ (Queer: p141). Likewise, Ulrika Dahl questions the often presumed advance of queer in Nordic Region. Spain, after a terrible period under Franco, has perhaps surprisingly jumped into becoming a world leader: it has moved out of its repressions abruptly and seems to have become one of the most positive of climates. The uneven ‘progress stories’ of Germany, France and England are well known and documented here further.  In contrast, most of the Eastern European countries have had much more uneven struggles with their often deadly pasts. Russia could serve as a major example. Under communism there may have been an imagined ideologically friendly time with gays, but in practice it now seems to have been a very bad situation indeed: and it is scarcely better these days (despite the claims of Laura Essig whose work is singled out for critique). Poland is discussed in both books (by Jon Binnie, Christian Klesse & Lukasz Szulc). People have not fared well here in the past, and there are only small improvements now through a growing queer movement struggling with some limited success in an intensely homophobic country.

Secondly, both books take up the key theme of time: more specifically, they consider how the changes and different phases and paces in the development of gay rights and queer awareness have travelled across different European countries. Recently, the problem of queer temporalities has been given a key focus by prominent scholars like Judith Butler  (with her ‘fractious constellations of time and coincidence’) and some of the articles here confront this head on. Although both books come flooded with Western theorists and theory, there is also a concern about the ‘dangers of the civilizing mission of the west’ (Kulpa: p45). Most intriguingly, Robert Kulpa and Joanna Mizielinska produce an interesting timeline of ‘Western and Eastern Geo-Temporal Modalities’ and argue that although the Western Gay History can now be put into a fairly standard and well rehearsed linear sequence (from the early 50’s homophile movements through Gay Liberation to the modern LGBT and queer), it can be challenged for its global relevance. It is seemingly linear (in fact it is not at all).  The Eastern model they suggest is one of jumping around with a full spectrum of earlier ideas: so that after 1989, the Eastern Europe countries ‘knot’ and ‘loop’ into these earlier traditions, becoming homophile/LGBT and queer all at once!   On the evidence here, these are good examples for rejecting any universal models of gay progress (but as if, these days, anyone would?). There is mounting opposition to any universalizing tendencies – and especially any push to lead into Anglo-American dominance.  Dennis Altman of course noted this in his classic arguments well over a decade ago for the globalisation process in general: here it is clear for many countries in Europe.

And a third theme to be found is the way both books have a certain preoccupation with just how ‘queer’ these developments have (or have not) been. Lisa Downing and Robert Gillett begin their book with the line: ‘Europe is a queer kettle of fish’. I am not quite sure what they mean by this; but certainly all countries seem to have flirted with queer ideas. But in the main, my sense is that ‘queer ideas’ have not gone down well with wider populations.  In some cases there seems to be a rejection of anything that might sound like an Anglo-American imperialism or importation. In others it is a more a sense that for everyday gay and lesbians, far removed from elite intellectual institutions, this is just a step too radical – it goes too far for them. But of course, each books tells a different story for each country. Almost every article touches on the themes of course – it is the project of the books. But in a lot of cases, it seems the ideas only attract a few ‘radicals’. But it is still only early days.

A short review cannot do justice to the range of the 23 articles here. The books bristle with wonderful illustrations. I enjoyed, for example,  the account of Madonna’s rejection in Romania and Lambevski’s personal tale of a friend being navigated around idea of intimate citizenship. Sasha Roseneil’s awaited research gets a brief airing here too.

All in all, the two books have much to offer.  If they were not so ridiculously costly, I would suggest they should both find a place on the personal book collections of both queer theorists and European specialists. In these two books brimming with ideas, we see the challenge not only to ‘de-centre’ sexualities in Europe – but ultimately across the globe.  These are provokations indeed. In the meanwhile there is much to inform, stimulate and delight in these telling collections.