I first encountered the work of William James as an undergraduate in the 1960’s through his ideas of The Self.

Later, I read more and more of his work. His ideas of pragmatism, the plural universe and kindness have been been important to me.

Nowadays I read him often.

Below are a few of his sayings that have inspired me. 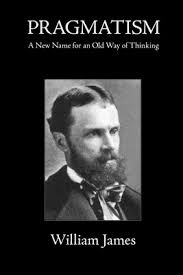 William James asks his uncle : What is a life for? And is told: Three things in human life are important. The first is to be kind. The second is to be kind. And the third is to be kind. (cited in Robert Coles: Handing one Another Along (2010) p241.)

Now the blindness in human beings … is the blindness with which we are all inflicted in regard to the feelings of creatures and people different from ourselves. We are practical beings, each of us with limited functions and duties to perform. Each is bound to feel intensely the importance of his (sic) own duties and the significance of the situations that these call forth. But this feeling is in each of us a vital secret, for sympathy with which we vainly look to others. The others are too much absorbed in their own vital secrets to take an interest in ours. Hence the stupidity and injustice of our opinions, so far as they deal with the significance of their lives. Hence the falsity of our judgments, so far as they presume to deal in an absolute way on the value of other person’s conditions or ideals…What is the result of all these considerations…?  It is negative in one sense, but positive in another. It absolutely forbids us to be forward in pronouncing on the meaninglessness of forms of existence other than our own; and it commands us to tolerate, respect, and indulge those whom we see harmlessly happy and interested in their own ways, however unintelligible they may be to us. Hands off: neither the whole truth nor the whole of good is revealed to any single observer, although each observer gains a partial superiority of insight from the peculiar position in which he (sic) stands… William James, On a Certain Blindness in Human Beings…. James (1899/1913).

These then are my last words to you. Be not afraid of life. Believe that life is worth living and your belief will help create the fact.  The Will to Believe. (1896)

What most horrifies me in life is our brutal ignorance of one another… William James, in Richardson 2006 p381

I am done with great things and big plans, great institutions and big success. I am for those tiny, invisible loving human forces that work from individual to individual, creeping through the crannies of the world like so many rootlets, or like the capillary oozing of water, which, if given time, will rend the hardest monuments of pride. William James: Letters; and also cited in Biography” by Robert D Richardson   2006/7   p384