“I don’t want to philosophise. I just want to tell a story”  says one of the singers in this new musical production.

Last night I went to the opening of the spectacularly talented’s National Youth Music Theatre production of Jason Robert Brown’s review/song cycle Songs for a New World at the Bridewell Theatre, off Fleet Street. It was  the start of a short season of Brown’s work.  Jason Robert Brown is part of a new cluster of lyrical song writers who are the modern face of the American musical – the Sondheim inheritors who see the musical as a challenging form and write their musical at an angle. Songs  was Brown’s first musical written in 1995 when he was 25, a first musical, and although it did not have a long run, it was immediately recognised as displaying an intriguing new talent  The show was recorded by RCA Victor and has been around since 1996.

The first staged musical of Brown’s that I saw was only last year – Parade at the Southwark Playhouse.  Parade tells the true story of a Brookyn-born Jewish factor manange Leo Frank accused of raping and murdering a 13 year old employee, Mat Phagan – a trial full of race and ethnic tensions, sensationalised by the media and eventually a lynching party. It was superb in all dimensions and won much critical acclaim. So I wanted to see more of his work performed. And I was not disappointed with this new production of Songs. Staged by an overwhelmingly talented and energetic youthful company who sparkle, sparkle  and then sparkle again. There are no weak links, and the sung through musical overflows with passion and joy. The future  of the musical is safe in the hands of such talented energy- thanks to the National Youth Music Theatre, formed in 1976 to foster such marvellous talent.  The songs are all about moments that hit us when a choice has to be made and a future shaped; one by one they are delivered with emotional verve and tuneful, powerful voice. They each tell a story suggesting the power of stories in our lives. (And each song has been analysed in Scott Miller’s Rebels With Applause: Broadway’s Groundbreaking Musicals (2001):Heinemann). All in all it is a glory. The only sad thing is that it runs for a mere seven performances. Hurry now to see it!

A bit of good news is that this is only part of a (still very short) season.  The National are also doing a concert version of The Last 5 Years on Sunday 5th August and  Brown himself is directing 13, at the Apollo Theatre  from 22nd to 25th August. More treats await us. 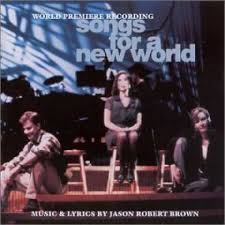 Songs for a new world runs at the Bridewell, Fleet Street, London till Saturday 4th August 2012

← The Olympics: Lest We Forget
Inspirations: William James →